Throughout 2021, Metro staff has been working with the community to plan future transit improvements through an initiative called MetroNEXT. MetroNEXT is a year-long strategic planning and community engagement effort to develop short- and long-term strategies to enhance transit in the Omaha region.  Hundreds of public comments were received during the first round of outreach this spring.  This feedback has helped guide Metro’s work, including the identification and screening of 15 corridors for potential enhanced bus service or ORBT expansion in the future. 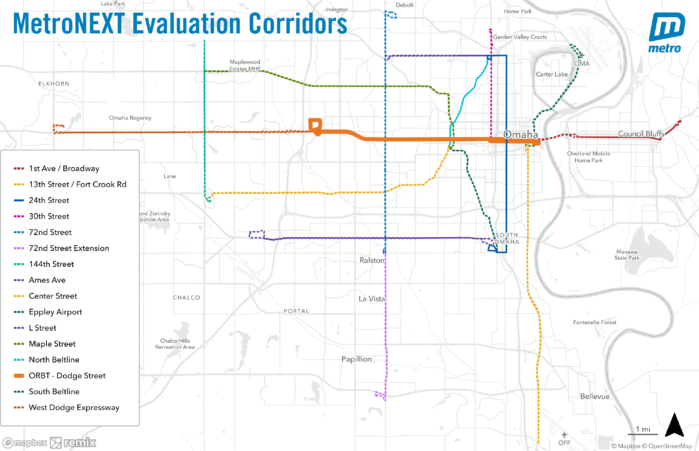 Over the past few months, these corridors have been evaluated to assess the viability of transit enhancements and prioritize lines for further study.  These screening factors included:

This technical screening process helped prioritize a top list of corridors for further study.  Metro staff then met with dozens of community & civic organizations to gain additional insight and determine which line should be developed first.

This work has culminated in the selection of 24th Street as the next priority transit corridor. 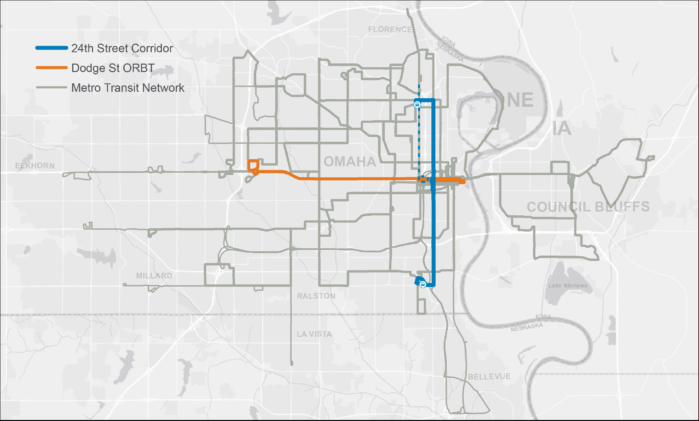 The corridor, which runs from the North Omaha Transit Center near 30th & Ames to the MCC South Transit Center near 30th & Q via 24th Street, is currently served by Route 24, one of the most-used bus routes in the Metro system. In addition to the two transit centers, connections include 16 local bus routes, seven express routes, the Dodge Street ORBT line, and dozens of community destinations along the corridor. The study area would also consider 30th Street as an alternative north of Dodge Street, with potential extensions at the north and south ends of the corridor.

Numerous studies have recommended transit enhancements on 24th Street. Metro is able to build upon these previous efforts to design enhancements for the corridor. These studies include:

24th Street has been a vital transportation corridor from the early days of Omaha’s history, and public transit has served travelers on the corridor since a horse-drawn railway line began in 1874 – representing nearly 150 years of continual transit service in the area.

At its peak, a packed crosstown streetcar connected working-class neighborhoods on the near north side to jobs in the stockyards of South Omaha. This line was one of the most heavily utilized for the first half of the 20th Century, and one of the last to be converted to bus service as streetcar operation was discontinued throughout Omaha and Council Bluffs in the 1950s. 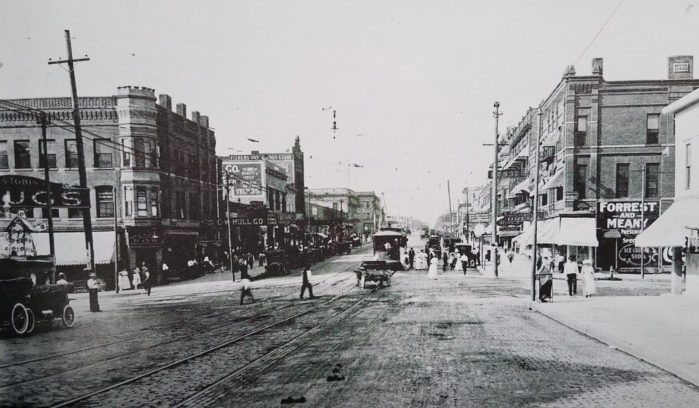 This rich history established a strong foundation for 24th Street as a transit-oriented community, and many of the original buildings are still in place today. Compared to many other corridors throughout the region, 24th Street preserves the walkable, compact, and historic neighborhood character that continues to make multimodal transportation popular among area residents.

Today, the 24th Street corridor is home to some of our region’s most economically disadvantaged residents. As shown in the chart below, many households in the area lack access to transportation due to physical or financial limitations, which can have profound impacts on health outcomes and quality of life. Enhancing transit along the 24th Street corridor is one step toward increasing accessibility and economic mobility for residents.

The region as a whole will benefit from enhanced transit along the 24th Street corridor by providing fast, reliable, safe, and frequent service with enhanced amenities along a line that connects North and South Omaha. This corridor offers access to many essential services including health care facilities, cultural destinations, educational services, and support services. 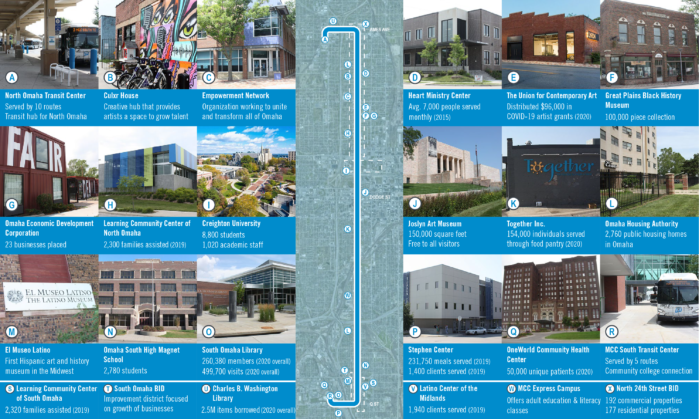 The selection of 24th Street as a transit priority corridor begins a multi-year process to coordinate and develop improvements, and the timeline for implementation will depend on the level of desired infrastructure. Metro has begun seeking funding for a formal study of the corridor to compare potential designs including an enhanced bus route, upgraded amenities, or a new ORBT line.

More information will be shared as funding for the study is secured, and Metro is eager to work with area businesses, organizations, and residents to shape the future of transit on 24th Street. 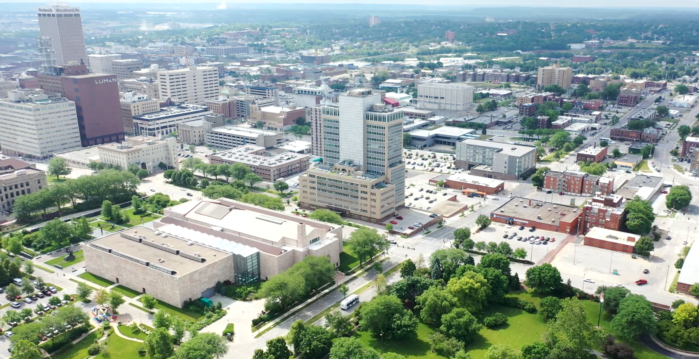 A variety of additional transit improvements will be considered as MetroNEXT continues into the fall, including improvements to existing bus service, more frequent bus arrivals, upgrades to the fare payment system, better bus stops, clearer passenger information, and new service types to connect the region.

More information will be shared as future rounds of engagement are scheduled this fall.  Metro values input from the community and looks forward to collaborating with riders, local organizations, and other community members throughout the region to shape the final MetroNEXT Plan, which will guide Metro for years to come. Learn more at ometro.com/MetroNEXT.

Metro has begun installing new fare readers on buses in […]

Metro is preparing to introduce a new, contactless option to […]