Later this year, Metro will replace Route 2 with ORBT, Omaha’s first bus rapid transit line. In anticipation of this change, Metro hosted two open houses in March for riders whose trips may be affected. A third open house was planned, but cancelled due to concerns about the spread of COVID-19. Meeting materials were posted on ometro.com with a link to the digital comment form. Approximately 41 people attended the open houses, and a total of 47 people provided responses to the comment form through in-person and online formats. 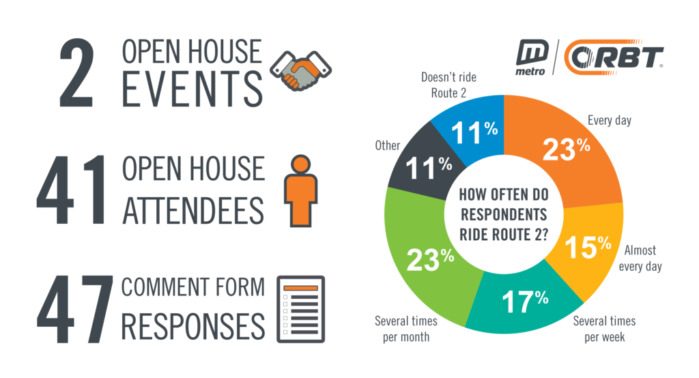 The completed comment forms had a total of 184 origins and destinations. Of that total, 18 locations, or 10% of survey results, require a rider to travel more than 3 blocks to an ORBT station as part of their trip. This is consistent with Metro’s earlier analysis, which showed that 9 out of 10 riders would have their nearest stop change by 3 blocks or less. The map below shows location results gathered through public input in March 2020. 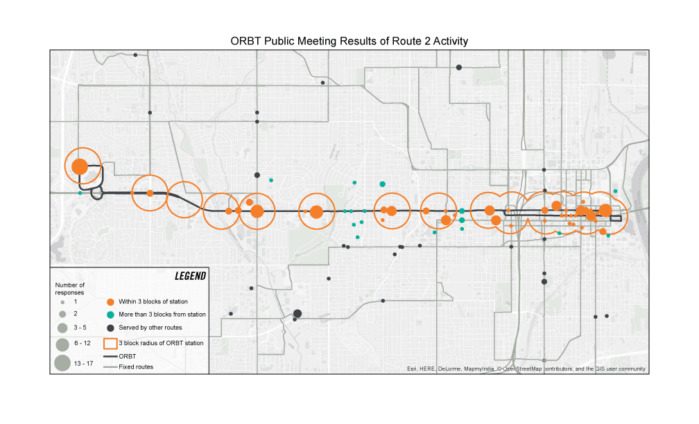 While Metro has worked to minimize negative impacts to riders, we acknowledge that some riders will experience an increased distance to their stop. Riders who are physically unable to reach their nearest ORBT station are encouraged to apply for MOBY, Metro’s paratransit service, which offers accessible transportation for qualifying individuals.

Metro’s planning team is following up with the 25 riders who requested to be contacted about these changes. In addition, Metro will be using other methods of outreach as we approach launch to make this transition as seamless as possible for riders.

Other Questions from Open Houses

Why not use electric buses for ORBT?

Metro has transitioned the bus fleet to either emissions-reducing CNG or clean diesel-powered buses, which feature a robust emission filter. The buses purchased for ORBT will be fueled by CNG. Recently, Metro was awarded a competitive federal grant to begin implementing electric bus technology, laying a foundation for further use across our fleet in the future.

How will people pay their fare on ORBT?

The price for ORBT will be the same as local bus routes, and riders will pay at a station kiosk or other sales outlets. We’re exploring additional payment options for the entire Metro system, such as smart cards and/or mobile ticketing. More information will be announced in the near future!

Have additional ORBT lines been identified?

Throughout the outreach and planning process for ORBT, many people have expressed interest in future ORBT connections to North and South Omaha, as well as eastern or western extensions to our first line. While we’re excited to see the ORBT network expand, new funding would be needed for additional lines. As these expansion options are evaluated in the future, public involvement will play a key role in identifying the best path forward.

If you have any questions or concerns about the transition of Route 2 to ORBT, please email planning@ometro.com. If you have general feedback about ORBT or any of Metro’s services, you can fill out our customer service comment form or call Metro’s Customer Service department at 402.341.0800.