Getting road-ready: how a bus earns its stripes 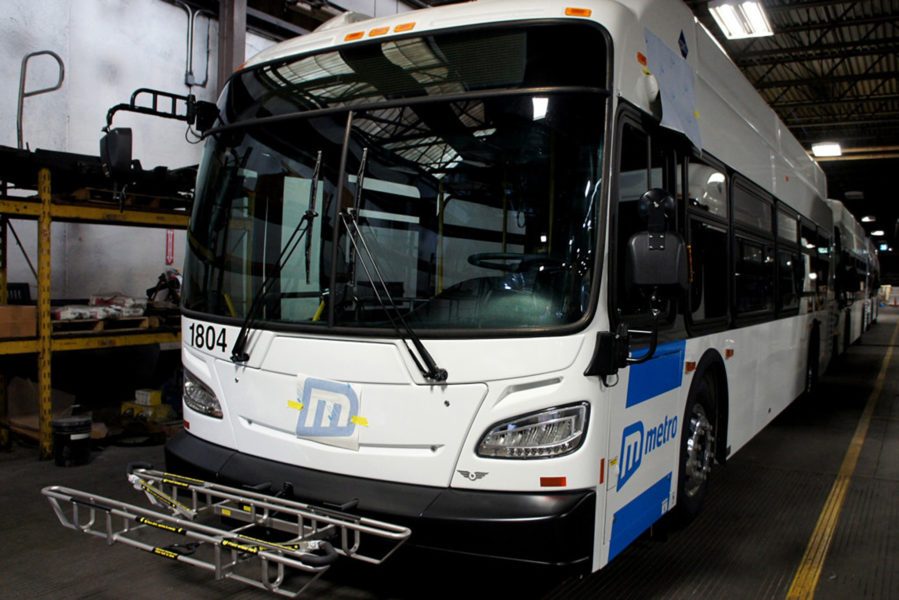 It’s out with the old and in with the new as Metro received its tenth new bus this week.

“By bringing in new buses and retiring old ones, the average age of our fleet will drop from 9 years to around 3.7,” said Curt Simon, Metro’s Executive Director. “This takes us from one of the oldest fleets in the nation to one of the newest.”

Buses will go into service about 30 to 45 days after arriving at Metro after almost two years of planning, preparation, and production.

Buses go through what the Federal Transit Administration calls a “useful life,” which indicates the minimum amount of time a capital asset should be used in service. A typical transit bus has a useful life of 12 years, after which it is eligible for retirement.

About one-third of Metro’s fleet have exceeded their useful life. A total of 38 new buses will arrive in phases by early next year, replacing all eligible retirees.

Buying buses begins by securing funding. They can be purchased in a variety of ways, usually with a combination of federal grants, local grants, and Metro’s required “local match.”

Once funds are identified, Metro begins the process of establishing technical specifications, ordering buses and requisite maintenance supplies, and monitoring factory production. After a final on-site visit from Metro inspectors, the new buses depart for Omaha.

“When buses arrive at Metro, we administer what we call ‘the shakedown,’ which is a military term used when determining if a vessel is roadworthy,” said Glenn Bradley, Metro’s Maintenance Director.

They also get some color. The Metro brand is applied to the exteriors, giving the buses their recognizable blue stripes and unique bus numbers.

“At that point, we say they have earned their Metro stripes,” Bradley said.

What to Expect When You’re Riding

The first of the new buses got its stripes this week and is scheduled to begin service next week.

“We’re excited to introduce these new buses to our fleet,” Simon said. “They will help us provide a more reliable and comfortable ride for our customers and help us better connect our community.”

New buses aren’t the only new thing coming to Metro. […]